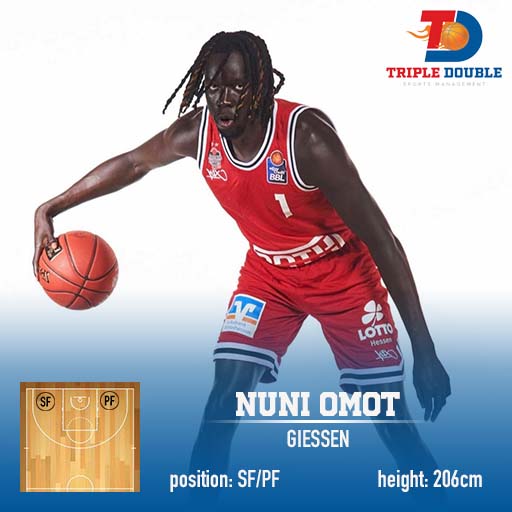 Born in Kenya, raised in Minnesota, Nuni is a high IQ swingman who can guard multiple positions!

He is one of the most intriguing players in Fiba Europe Cup in the 2019/2020 season.

He is enjoying his rookie year with 17.2 ppg and 5rpg.

Omot has great length, he is an extremely athletic player, who has both an inside and outside game.

Nuni can shoot the rock. And at 6-foot-9 with a 7-foot wingspan he can shoot it over pretty much anybody.

As a product of one of the greatest programs,Baylor University, Nuni has a lot of things to show and prove.

The most exciting thing about him is his character.

Nuni wants to compete, work hard and to improve.

There is no doubt that Nuni will be successful because he’s so articulate in everything he does and he’s so personable. He’s one of those guys whose personality attracts people.

Nuni will play in one of the top leagues in Europe in the season 2021/22as he signed with ambitious German team Giessen.