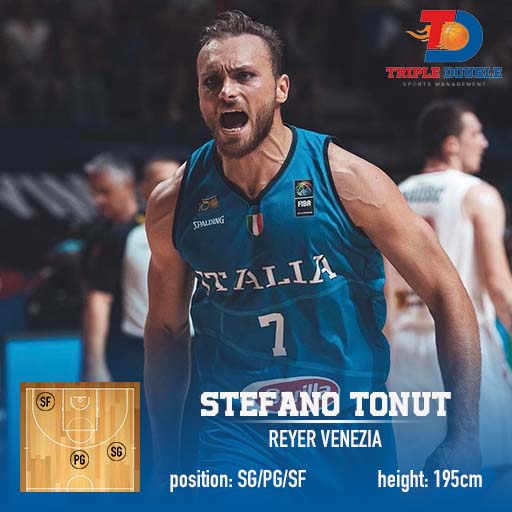 Stefano Tonut is a prototype of a modern leader!

He is one of the best and most valuable Italian players.

Stefano was the MVP of the Italian Championship in the season 2020/2021,and he is a leader of his team Reyer Venezia for already 6 years.

Stefano is coming from basketball family and he is a perfect example of hardworking individual who is completely dedicated to basketball!

His father Alberto had a successful career and was also a member of Italian National Team.

Tonut can play all guard positions with the same success,with no difference,and this is something that makes him so unique and attractive.

He is a fantastic shooter,versatile scorer,who loves to take responsibilty in the last moments of the game.

He is a clutch player.

His athleticism and strong body are giving him the possibility to defend at the highest possibile level.

Stefano Tonut is a Italian National Team from 2015 and he played an important role at Olympic Games in Tokyo.

There is no doubt that he performs at Euroleague level for years,and that we gonna see his high level performances also in the future.