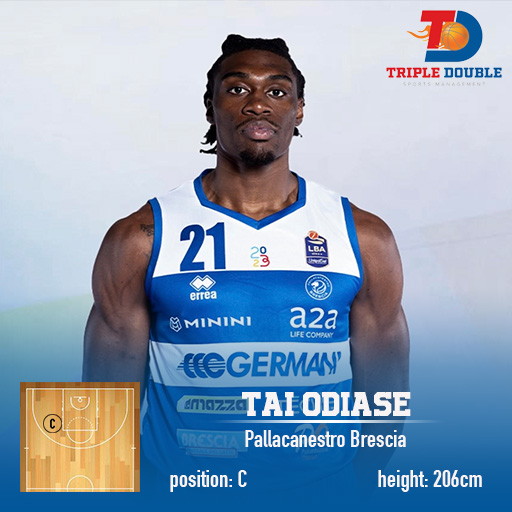 Tai Odiase is one of the top big men in the German Championship and Basketball Champions League!

He played college for University od Ilinois Chicago (UIC) and averaged 9.3 points, 5.6 rebounds and 3.1 blocks during his senior season. He was also chosen twice as “Horizon League Defensive Player of the Year” and finished three times in the “Horizon League All-Defensive Team.” Tai also holds the record for most blocks in UIC school history (361 in four years).

His defensive game is on high level already but has some space for improvement too. Elite shot blocker and rim protector, his feet are quick enough to switch on perimeter and offers a lot on the defensive end.

His athleticism and quick feet help him a lot in switching on pick & rolls. Has no problems to follow guards and stay in front of them. With his good hips he can turn smoothly and moves good laterally. Always switching in late clock situations and even the top 1vs1 players have some hard time getting by him.

With the athleticism and high reach that Odiase possesses, he can play as above the rim target and hard to stop when he is in the air.

There is no doubt that Tai Odiase has a bright future.

He is also known as a true professional and hardworking person who wants to improve every aspect of his game.

Tai is playing in the strong German Championship this season for one of the top teams,Ewe Baskets Oldenburg.

His team is also competing in prestigious Basketball Champions League.

In the summer 2022 Tai has signed with the Top Italian team Pallacanestro Brescia and he will compete in Eurocup!